This research project reveals how the extraction of the world’s underground resources territorializes through artisan mining labour.

By extractive labour we mean the commodified work that serves to obtaining value from ‘natural’ mineral deposits. By territorialisation we mean the way such labour is socially and spatially embedded in multi-scalar extractive assemblages. In the debate on planetary sustainability, mining has come under renewed scrutiny for its environmentally and socially damaging impact. However, the discussion tends to be limited to large-scale extraction sites. Considering that an estimated 40 million people worldwide work in artisan and small- scale mining (ASM), there arises a need to assess the wider role of such arguably ‘informal’ and ‘non-industrialized’ resource (re)production in social, political and environmental terms. Our research focuses on Africa, more specifically Zimbabwe, DR Congo and Burkina Faso. The studied resource will be gold, the production of which – partially due to the ongoing global financial crisis – is experiencing unprecedented levels. We investigate the central role the mobile and often highly precarious extractive work of African artisan mine workers plays in transforming natural gold deposits into commodities. And we highlight the relations and networks through which extractive labour become embedded in the local context – notably through processes of sprawling urbanisation. In so doing, this comparative research will reveal the conditions under which extractive frontiers materialize in contexts where the commodification of natural resources is often highly contested and embedded unequally in global supply chains.

Archaeology of a Frontier is a joint project of MIC|C, Osservatorio Migranti Basilicata and Liminal Geographies. The project has as its main objective to expose the traces of those silenced and invisibilized trajectories on the shores of the Mediterranean that official border regimes systematically try to erase. Through the detailed exposure of various fragments, including archaeological remains, pictures, documents, video, and audio recordings, we aim to describe the anthropogeographic history of this emerging borderland at the time of its formal dissolution. Archaeology of a Frontier thus provides the evidence of a momentary presence, a testament to the impermanency of life as it has existed, like the smouldering ashes of a fire, or the traces of a camp after it has moved on.

The Mediterranean is currently confronting an important crisis of representation. In modern historiographies, a kind of ‘Mediterraneanism’ appears to reign that shares an implicit cartographic vision of the Mediterranean space, one that reproduces its complex topography into a single, unitary epistemological -predominantly whitening – framing and political management. In our contemporary era, one central object of that epistemological frame is the Black African migrant. Seemingly floating on its fluid waters to reach the more stable topographies of continental Europe, Black migrants (categorized single-handedly as refugees, asylum seekers, displaced people) have come to increasingly symbolize the instability and insecurity of that space, which historiographers once described with such exoticizing and essentializing certainty.

Since 2015, first sparsely, and then more systematically, I have been producing evidence on this blog of a different space that is emerging on in the European-African borderlands. On the one hand, I challenge the romanticization of the Mediterranean as a space of convivial exchange and unfettered hybridity, pointing to oft-overlooked histories of racial violence and their contemporary reverberations. On the other hand, I describe the Mediterranean Sea as a space of multiple mobilities, traversed by various frontiers and border technologies, and spanning both colonial legacies and postcolonial conditions.  With the members of the Black Mediterranean collective I share an urge to stimulate this alternative narrative, which simultaneously dislocates the whitening gaze on the Mediterranean and offers space for a diasporic community to develop in its midst. 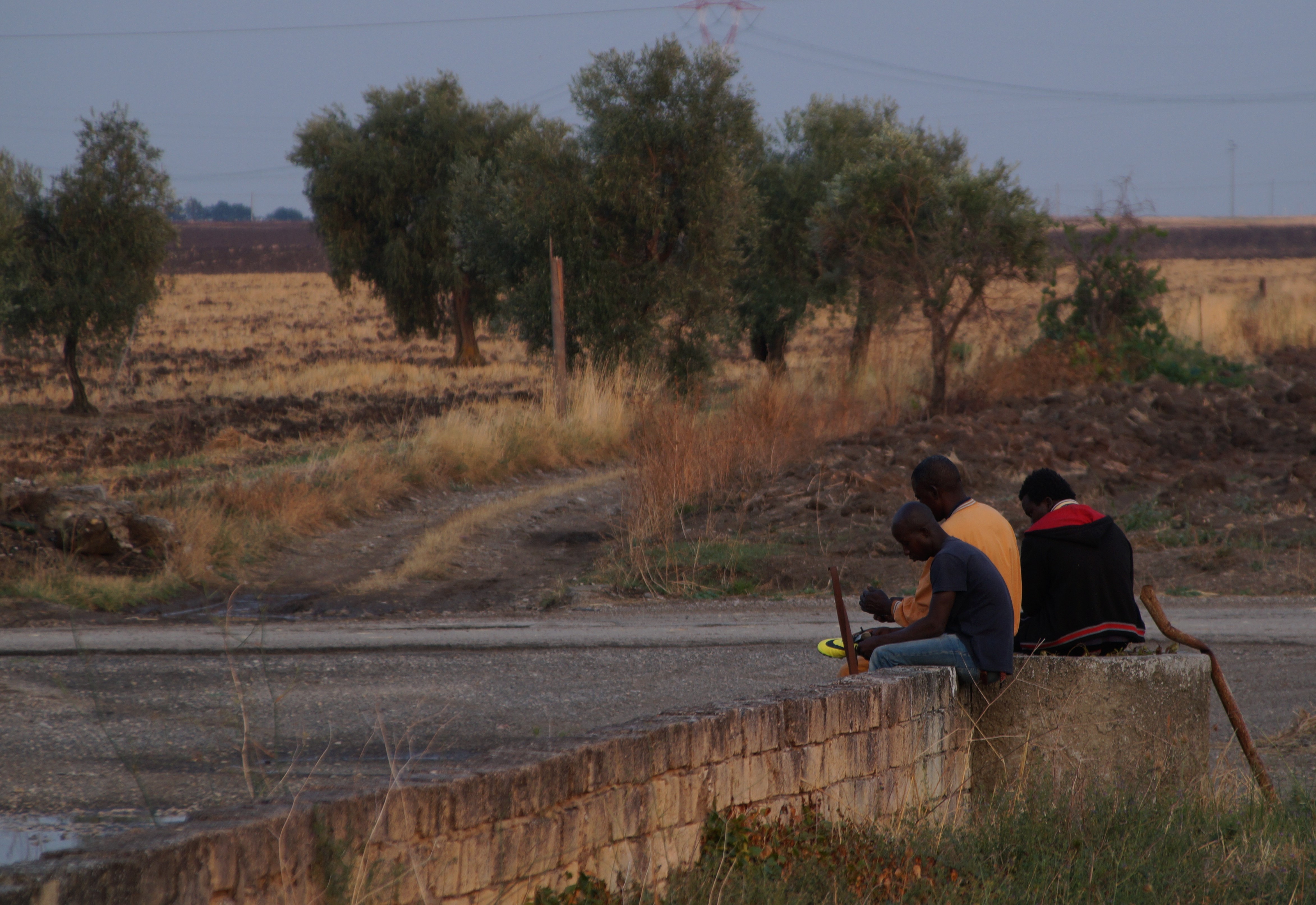 This project engages in a comparative enquiry into the triple dynamics of race, space and “illegality” in the reproduction of migrant precarious labour conditions in European agro-industrial labour markets. What are the mechanisms of differential inclusion and segregation of migrant workers in the agro-industrial labour markets? We try to answer this question through a systematic comparison of five original case studies that are currently almost uncovered by research on migrant labour in Italian, Swiss and Belgian horticulture.

2013-2018: The impact of mineral governance on miners’ property rights: a comparative case study from the Democratic Republic of Congo (DRC) Funded by Swiss National Science Foundation

The  project aims to test the validity of the ‘resource curse’ paradigm through a comparative case study analysis of transnational mineral governance in the Democratic Republic of Congo (DRC). It specifically concentrates on the transformation of the rights of use and access to natural resources enacted through the classification, standardization and formalization of these rights in selected mining enclaves in Katanga and South Kivu (Eastern DRC). The focus of the project will be on one specific set of minerals (tantalite, tin ore and tungsten – the three T’s) and their regulation through the ITRI Tin Supply Chain Initiative (iTSCi). In doing so it assesses the way this reform process impacts on the performance of mineral markets in both mining areas, and what impact this has on the institutional choice patterns of mine workers. In sum the study aims to provide more insights into the political ecology of natural resource markets in countries emerging from protracted armed conflict, specifically detailing (1) the transnational dimension of economic regulation and (2) its impact on the institutional choice patterns of direct natural users of natural resources in the specific case of the DRC.

2013-2015: The precarious and multiple spaces of youth displacement in eastern DRC funded by FAFO

This analysis concentrates on the dynamic space of forced displacement in the extremely fluid and uncertain context of political transition in Africa’s Great Lakes Region. It specifically zooms in Eastern Congolese youth, a subgroup that has played a preponderant role in violent restructuring during the region’s protracted war. African youth are frequently portrayed as in-between and almost non-citizens who float between childhood and adult life worlds. In the Democratic Republic of Congo (DRC), some youth played a particularly active role in armed violence by taking up arms as Mayi Mayi fighters and other armed groups. Whereas most studies focus on violent youngsters and their problematic integration into post-war society, this analysis consciously takes the perspective of non-combatant youth, trying to answer the question in which places non armed displaced youngsters are trying to construct and imagine a better life. In the aftermath of such a long and violent conflict (1996-2003), and considering the current obsesion with youth bulges in post-war reconstruction policy, it seems indeed a legitimate question to ask what is becoming of these non-combatant youth in terms of capacities, practices and structural conditions. In particular, this analysis concentrates on the often multiscalar space in which this youth displacement occurs, between physical borders, cities and rural hinterlands, and between individual attempts to making a living and imagining a proper life. Besides its strong geographic methodology, this analysis subscribes to a much wider effort to elucidate the underlying dimension of identity and life making in the political economy of post-warfare, which brings about certain constraints and possibilities. This (inter)subjective dimension of livelihood restructuring during and in the aftermath of war has often been neglected in dominant livelihoods and policy research. The general aim of this analysis, therefore, is to offer insights into the ways young people who have been forcebly displaced by armed violence are trying to construct an autonomous place among multiple registers and hallmarks.

The ghetto according to Franco LaCecla is “a boundary, a space, where (…) you are in front of a dislocation, a displacement. The border to those inside and those outside represents a feeling of loss, but it is also a mirror of each other’s identity, a threshold that allows us to refine our identity and filter others.” Using this definition, the ghetto itself bears many parallels to the artistic process, an act of creation which helps to define one’s identity and distinguish it from others. After a preparatory period, the project will involve 9 international activities (one kick-off meeting-debate in Sep.2013, 6 ten-day workshops in 6 European cities (Bologna, Milan, Helsinki, Warsaw, Paris, Berlin) run by artists from different artistic backgrounds from all over Europe in, one conclusive activity in Warsaw in 01.2015 and one evaluation meeting with partners in 02.2015. The artistic workshops will be run in migrant districts of those 6 cities and will be prepared in collaboration with a network of organisations working on the themes of migration and art in the selected areas.

Violent conflicts are frequently perceived as a form of state and governance failure. Conflicts often offer the opportunity for new classes of local and regional strongmen to challenge political powers. In most conflicts, a number of actors (militia-leaders and members, political elites, businessmen, petty traders, but also households and groups) have tried to improve their position and to exploit the opportunities offered by a context of internal conflict. The result is that relations between populations and politico-military or economic elites are reshaped by violent conflicts. Rather than simply disrupting or destroying the local social and economic fabric, conflicts create new opportunities for some even as it takes them away from others. Even more, in a context of weak state administrations, certain non-state actors can be witnessed to provide valuable public goods. The question then is, to explain how these dynamics of violence have led to the formation of new forms of power and control and what these new forms of local governance include: To what extent can actions of violent political or economic entrepreneurs promote order and provide public goods?  What do these ‘new forms of governance’ include, who do they integrate, who is leading them? What impact do these stateless patterns of power have on processes of formal state-building?

I am proud to announce my first Italian book with colleagues Ilaria Ippolito and Mimmo Perrotta: ‘Braccia rubate dall’agricoltura: Pratiche di sfruttamento del lavoro migrante’. The collection, published with SEB27, addresses the plight of migrant labourers in Italy’s regional agricultural supply chains, from Puglia to Piemonte. Different chapters emphasize the systemic linkages between repressive laws, retail monopolies and geographic marginalization, which have become a structural feature of migrant exploitation. I am grateful towards the Swiss Network for International Studies, which generously funded the New Plantations project I directed in 2015-2017. The Piemonte and Basilicata research are both outcomes of that research project.