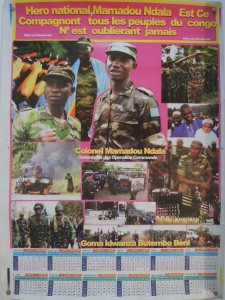 Impressions from a short trip to Eastern Democratic Republic of Congo to research the plight of internally displaced people in January 2014.

Beni 11 January 2013 – A week after the assassination of Mamadou Ndala, the loved (and hated) commander of the Congolese army in North Kivu, the plot thickens about the reasons for his murder. On 2 January, his body was set ablaze on the road between Beni and Mavivi. Only days after his defeat of the feared M23 rebellion, the commander and two of his body guards got caught by surprise by an attack from the nearby bushes. His truck was pierced by two RPG rockets from a yet unknown source. 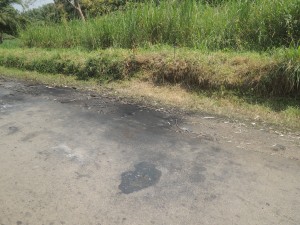 On the place of his murder today, the patch of black ashes left by his pick up truck makes it hard to imagine the consternation arising after flames and a stray of bullets killed both Ndala and his bodyguards (the video taken after the shooting contains some shocking images). While MONUSCO (the United Nations Mission in DRC) and army investigators still try to make sense of what has happened, the last few days local manifestations risked turning violent. After protestors attacked the house of one suspect in Beni, North Kivu governor Julien Paluku and UN chief of Mission Martin Kobler quickly came down to calm spirits. From their respective platforms they managed to convince local youth to lay down their arms and wait for Congolese justice to run its course.

As usually in this part of the country, the plot around Ndala’s murder thickens rapidly towards numerous conjectures. Names of suspects and arrests circulate with the speed of light. From the first custodies, it nonetheless becomes clear that Ndala’s murder has been an inside job. The earlier hypothesis that Ugandan rebels from the ADF had killed the commander is now quickly abandoned in favour of internal army competition. Clearly, his rise as a national hero had started to envy certain people inside the FARDC up to a point that the man seriously feared for his life. What makes the murder even more unbelievable is that it took place on small portion of the road between MONUSCO and FARDC headquarters, less than 5 kilometres from the centre of Beni town. Abandoning crucial evidence, like for example a mobile phone used to send a message to the FARDC commander who had apparently ordered the killing, made the executors look either incredibly stupid, fearless, or megalomaniac. Everyone who knows this part of the country a bit will tell you the truth probably lays between the latter two.

Whatever judgment will await this case, the assassination of Mamadou Ndala has made it quite clear that the Congolese conflict is bigger than the M23. Today it comprises at least two other strongly embedded militias, the FDLR and ADF-NALU, whose forces operate indirectly beyond the small fiefdoms they defend against intruding forces. Since the past year, the latter is progressively developing into a regional Islamist threat in Eastern and Central Africa, with potential (indirect) connections to bigger forces like Al Shabaab as well as other regional spoilers, as freelance journalist Digitaldjeli writes in a rare researched article on the Congo-Uganda border.

This week, the animosity for Ndala’s death slowly gave way to posters and appraisals for his achievements in combat. After his acclaimed victory over the M23, Ndala started making preparations to go against the Ugandan NALU-ADF rebels hiding in the Rwenzori Mountains. Last year alone, the ADF kidnapped over 800 citizens, who with difficulty try to survive on the small stretch of land between Beni, Mbau and Oicha. Among them are three priests whose traces mysteriously have disappeared for over a year now. The Norwegian Refugee Council is currently preparing to reach destitute populations fleeing from the area in great numbers. More than 3000 households fled ADF territory since December last year, adding to the one million or more IDPs currently staying with host communities in the two Kivu provinces.

In the meantime in Goma and Beni, more critical sources arise against Ndala’s modes of operation. Some say he consciously exposed Rwandese-speaking captives, and his trumpet-style propaganda clearly started to irritate the FARDC hierarchy in Kinshasa. Meanwhile, judicial investigations are further complicated by numerous intimidations against witnesses as well as Ndala’s close friends.

Yesterday, another eccentric rumour reached the streets of Beni: the death of Rwandan president Paul Kagame. Not caring about the obvious reality that Kagame stood healthy and well talking to a group of American students, Congolese youth marched the streets to celebrate his death, chanting and cheering in great numbers. Crosses with the president’s name appeared in no time on the squares of this war-torn region. Covered in palm leaves, one girl smeared ashes over her face right on the spot where Mamadou’s car stood burning in flames just a week ago. 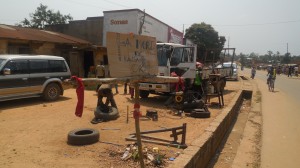 Besides the perennial power of Radio Trottoir across the region, these manifestations once again show the aptitude of of Eastern Congolese to bend their confidence towards a somewhat more hopeful future – even if it is based on dreams and resentment, rather than sheer diplomatic reality. Undoubtedly, this short episode will quickly be forgotten in favour of impending new challenges.