I’ve just finished reading Reviel Netz’s, Barbed wire: an ecology of modernity (Middletown: Wesleyan University Press, 2004). The book offers a detailed genealogy of this pain-inducing technology, from its initial use in the control of cattle in the American Midwest, to the control over people’s mobility in the South African Boer war, the Nazi concentration camps and the Russian Gulag. The book has strong credentials (endorsements by amongst others Bruno Latour) and has been widely discussed on the web: see here for an interview with the author in Cabinet Magazine, for example, and here for a review by Ian Hacking.

I decided to share my own thoughts on the book with you here.

Barbed wire cuts right through the history of modernity. It forms a symbolic representation of both the ingenuity and cruelty of the modern age, says the author. Though the book offers an original – call it Latourian – environmental history through the lens of a particularly painful technology it also contains a few minor weaknesses, the most important one being its almost mechanistic holding onto the devise as a historical necessity, almost, as well as a rather uncritical elaboration of Soviet history (for example Netz’s depiction of Stalin as the “anti-historical” figure appears rather conservative and uncritical: page 180). 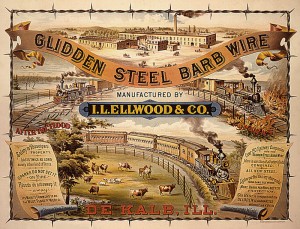 Chapter one of the book describes the invention and gradual expansion of barbed wire in the American Midwest in the 1800s. The device came into being as a result of what Netz calls an investors’ colonialism. Contrarily to traders’ colonialism, which thrives on the interdependence between disconnected places, the aim of American cattle farmers was to generate capital from the control over vast productive spaces. By doing so, they literally transformed the human ecology of the US Midwest into a network of reservations and settlements connected by lines (rail tracks and roads) and nodes (the frontier’s expanding cities). This shift was characterized by the transition from a seasonal, migrating bison economy to a permanent cow economy tied to a territorial control of property on a vast and unprecedented scale.

Interestingly, Netz notes, the ecology of the American frontier initially did not necessitate a bounded form of property but was rather based on branding. Up until the early 1800s, for example, Texans lived pretty nomadic lives, with little attachment to settlements. Capitalist farmers continued to tie property to the cow (through branding) rather than to the land. Cattle farmers thought it better to let the cows do the hard work of finding food and water and travelling over great distances, and then, at the right moment, safeguard its value (by offering some comfort before its death) and kill it for consumption. These mass killings usually took place near or in a city.

Throughout the 1830s, though, the competitive use of land (more concretely, the competition between farmland and pastoral land) led to an increasing segregation of productive spaces, which simultaneously served to keep animals off the land and to channel them into consuming cities. Barbed wire not only became crucial to facilitate this functional separation between cows and humans but also to prevent the movement of animals in undesired directions.

For cattle farmers, the introduction of barbed wire meant an increasingly cheap, labour-efficient resource, the use of which could be extended to other domains. Typically, its double-edged quality could be used to fence in cows – to prevent their instinctive movement towards more favourable climates in the South – as well as to fence them out of the farmland. From the “piles of death [cows], huddled together … against barbed fences” (page 34), an interesting shift occurred during this period, whereby farmers increasingly supplanted the razor sharp barbs (which inflicted often infectious wounds on the animals that were difficult to cure) to less vicious barbs. Barbed wire was increasingly sold as a technology to “protect” the cows (37), therefore, a form of education, to manipulate the cow’s movement, through violence (38). 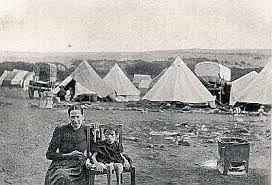 Whereas the book initially remains rather shallow on how exactly this shift from mobile to bounded property occurred in the US as well as in the colonies, this discussion is taken on in next chapter. Netz meticulously describes the British methods to fence in the mobile Boer economy (who controlled the South African Veld) through the extensive use of barbed wire. By establishing a connected system of railways and blockhouses, the British literally drove the Boers into the barbed fences they set up to protect the railway roads. Barbed wire also became a functional device to lock up Boer families who had been chased off the land into so-called “refugee camps” (which later were named “concentration camps”). Interestingly, again, the camp in British South Africa acquired a disciplining form. It was explained by its bourgeois implementers as a quarantaine that should prevent inmates from inflicting harm on themselves and seeking cures outside, even when the diseases they suffered were at least in part the product of their concentration.

The rest of the book is an extensive elaboration on the modern use of barbed wire, first in colonization practice (amongst others in Israel) and warfare. During the First World war, the double function of barbed wire, to control human movement and inflect violence, finally came together in single logic: “Here, finally, was a form of life organized around the single problem of preventing human motion, providing this problem with its perfect solution.” (page 109) 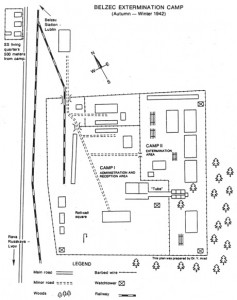 In the concentration camps of Auschwitz and Belzec, finally barbed wire returns to its original function, of controlling defenceless bodies inside an encamped space, bodies that are reduced to flesh and bone just like the animals before them. Inmates were reduced to mere receptacles of organic material, biological subjects who were stripped form their personal traits and no longer were full persons responsible for their own destiny (page 153-4). In a sense, then, the Nazi concentration camp forms a recapitulation to the industrial component of barbed wire as a technological device, this time not to control an animal but a human industry. This recapitulation involved a topological shift, Netz writes: from looking outward from inside pointed settlements (the British blockhouses in South Africa) to the outside laying “wild” frontier, the perspective changed towards an inward-looking one, from the outside perimeter towards the inside of the camps; all looking through barbed wire, the device that made this topological shift possible (146).

By way of conclusion, one could argue that as a modern technological device, barbed wire tremendously facilitated the process of bordering animal and human mobility in a combination of closures (violent separations) and channelled connections. Even though his argument risks to be somewhat mechanistic at times – barbed wire as the only thinkable solution to control human movement because of its sheer availability (145) – the general lesson of this book is still a very powerful one: whenever one’s mobility is being actively fenced in, those inflicting this violence will always explain it as some form of protection, either against the ‘wild’ world out there, or against one’s ‘instinctive’ will for anarchic mobility. As such Netz’s argument may well serve to link existing debates on the connection between sovereignty and governmentality, or the simultaneous ambition of modern (state) government to both discipline modern subjects and kill with impunity at the same time. In that sense, it remains telling that the justification of the concentration camps in the Second World War – depicting Jews as parasites that needed to be cured in some form of “protective custody” – survived pretty much throughout the war, despite the evident practice – and involvement of those justifying it – to the contrary.

A last question remains whether one should read Netz’s account mainly as a historical argument. “Barbed wire no longer matters much. That is because it succeeded,” writes Ian Hacking. Because barbed wire is now gradually being replaced by other devices, for example in the (biometrical) control over transnational migration, one could easily (and simplistically) come to this conclusion. Whereas these emerging technologies should not blind is from the evident presence of fences, walls and violence-inducing technologies in the control of migration flows, this question opens up further reflections on the changing function of borders nowadays, which, more than previously, serve to channel and segregate human movement, rather than block it altogether. But that is of course an entirely different discussion.