Since my last posts mentioning border art and the Black Mediterranean, I’ve been receiving some additional suggestions. In the following post I discuss some of them.

Nahrain Al-Mousawi, for example, mentions the thriving graffiti art in cities bordering the Mediterranean. These murals, she writes, show how fences and blockades may be used in quite different, opposing ways to the territorial governmentality expressed in bureaucractic border technologies, so that public space is being reclaimed in ways that engage the border zone as a reflection, not of a border that needs to be policed, but rather of the daily spectacle of explicit marginalization, exclusion and expulsions exercised by Fortress Europe. 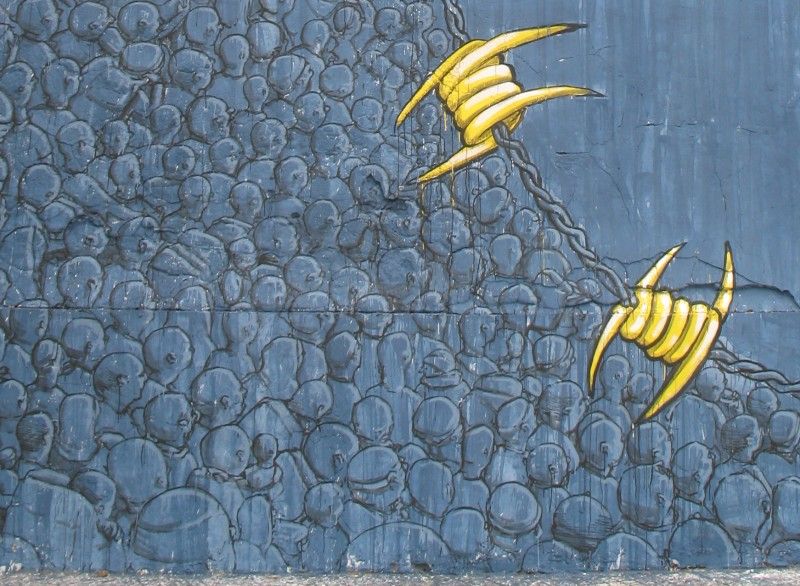 She mentions the giant mural by the Italian street artist Blu, which depicts the EU flag with golden barbed wires in place of stars, a large crowd looking from the outside. The mural is located in Melilla, the Spanish enclave from where African migrants are attempting to cross the fence on daily basis, often risking their lives. 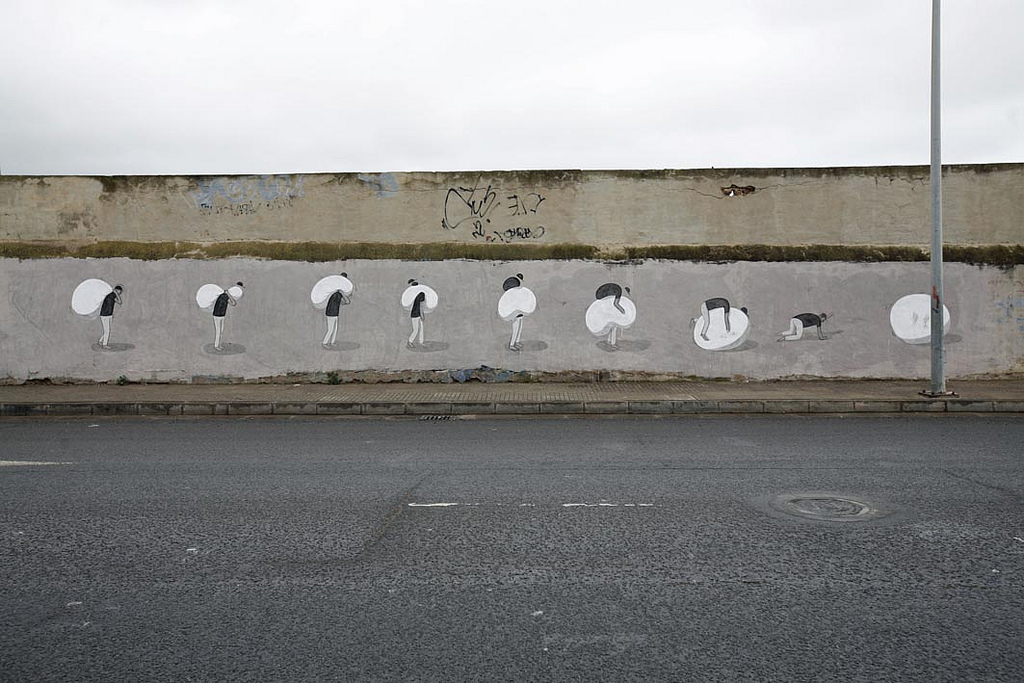 On a nearby highway wall, another mural, by Escif, called dematerialization, shows a migrant who, while initially carrying a large bag on his back, gradually gets absorbed by it, and rolls onwards, like a substance, devoid of humanity. 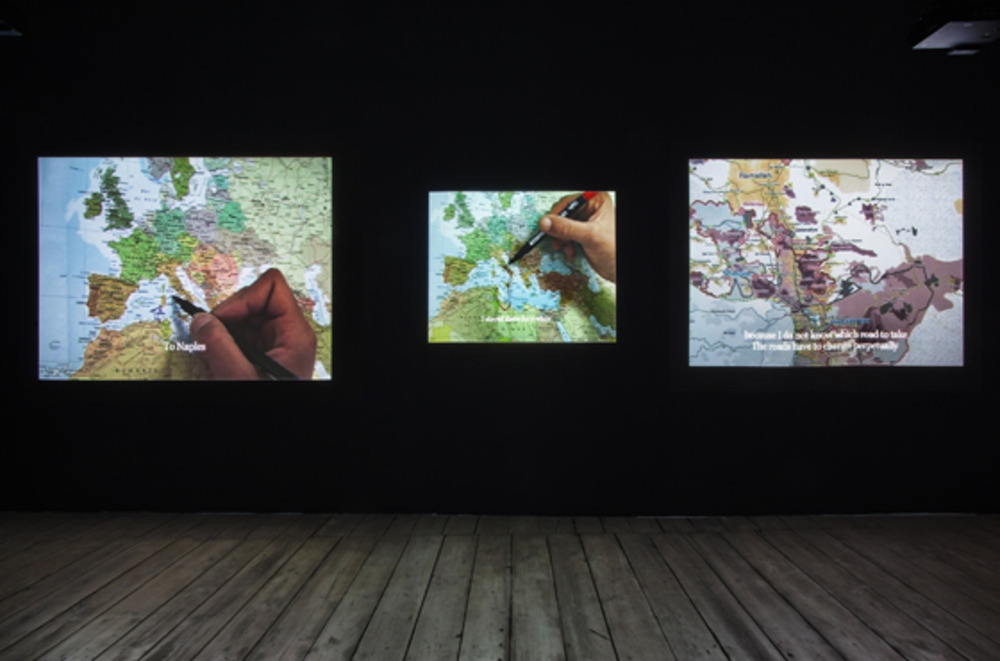 Reflecting my narratative of Ahmed’s journey in the racial geography of the Mediterranean, artist Bouchra Khalili proposes an alternative map of the Mediterranean area in The Mapping Journey Project (2008–2011), which spans from Marseille to Ramallah, Ramallah to Bari, Bari to Rome, Rome to Barcelona and Barcelona to Istanbul. His consecutive maps are based on eight clandestine journeys.

Inspired by Michel Foucault’s The Life of Infamous Men, the artist challenges the normative imposition of cartography, to reveal instead the underground and hidden geographies of people crossing spaces. His work forms a collection of what he calls “singular lives… which have become, through I know not what accidents, strange poems.” 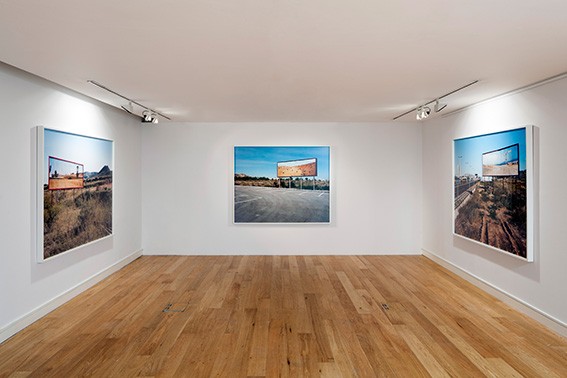 Different but nonetheless interesting in her own respect is Corinne Silva’s project Imported Landscapes. In 2010, she placed a number of billboards depicting landscapes from Northern Africa in Spanish Andalusia. The billboards are a reminder that landscapes themselves are palimpsests, she says.  The act of placing one landscape inside another – the southern hemisphere into the northern – creates a space to contemplate not only their shared topography but also the complex web of their ongoing connection of trade, mobility and colonisation. 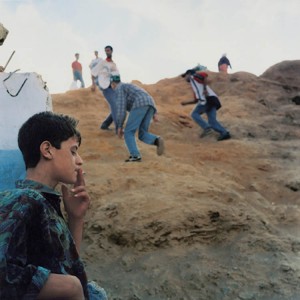 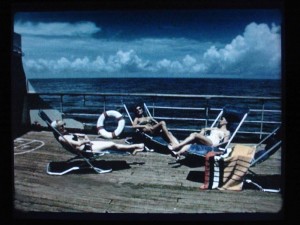 Through her work on cross-border smuggling, finally, Yto Barrada reminds us quite strongly of the statelessness of the border. For 30 years, the Northern Moroccan city of Tanger was consciously abandoned by state authorities; or rather, it became a free trade zone, where drugs and other commodities systematically contributed to a cross-border economy that totally depended on the complicity of these authorities with such transversal livelihoods. Just like a marvellous exhibition I just missed in Antwerp by Belgian photographer Nick Hannes, she juxtaposes this harsh experience with the seemingly free-floating, liberal tourist entertainment that straddles this very same border.

Even today (and this contrasts quite strongly with the dominant imagery about the border as a Fortress) fuel, refrigerators and other stuff is being systematically carried over the country border in Melilla under the eyes of the policing forces. As Barrada says in this video (and other people, like David Coplan and Wolfgang Zeller have written about borders elsewhere), there is an interesting creativity that comes with such places. Borders are, to some extent, where the action is. But while the daily life in border boom towns like Tanger, Bibia or Oshikango appear to bear testimony to the basic premise that one needs to “get it while you can,” as Zeller writes, where does this leave the artist who is trying to oppose the dominant imagery of the border as a fixed “line in the sand”, which somehow channels movement according to a single territorial logic? 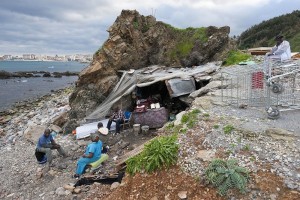 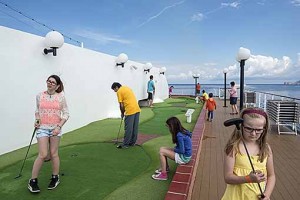 Quoting Agamben’s essay on refugee rights, Nahrain Al-Mousawi believes that such border art presents a phenomenological disruption, a rejection of normalized messages running through urban strategic space. It does so, she says, through an act of ‘cultural jamming’, which involves an interrogation and disruption of the totalizing effect of commodification in our lives.

This observation comes close to Amoore and Hall’s statement on border theatre in the US-Mexico borderlands. By creating surprising encounters with the technologies of security, they write, such theatrical installations can actually interrupt border sequences and create invigorated possibilities for public engagement. They particularly cite the work of Marcos Ramirez, who lives and works within sight of the border in Tijuana. By towing a gigantic Trojan horse onto the border crossing of San Ysidro, Ramirez was trying to unsettle the certainty of border technology –the routinized actions, the surveillance, the queing, the stopping, the checking, the waving through.

“It is precisely these too little noticed repetitive sequences of the border (…) that make the very idea of security possible. It is not the single declaration of exception per se that produces sovereign power, but the multiple ‘repetitive acts’ that write the very possibility of a securable state.”

In an original sense, therefore, these observations go back to Foucault’s proposition about what critique comes down to. At the end of the day, he says,

“A critique is not a matter of saying that things are not right as they are… it is a matter of pointing out on what kinds of assumptions, what kinds of familiar, unchallenged modes of thought the practices we accept rest.”

Unsettling these familiarities is probably what border art is best at. Though transforming such liminal experiences into an alternative ritual of border passage is probably a more difficult matter altogether.