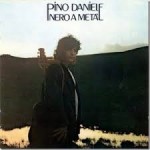 Pino Daniele, the great artist, passed away yesterday. Author of numerous fabulous tunes, voice of the margins, of Naples, Italy’s vibrant colonial city, and inspirer of a great musical  tradition, Afro-European at heart, like his saxophonist James Senese, as well as the many international musicians he shared his life and stage with, indeed, nero a meta’. I would like to remember him with this song I discovered just recently on an edited album called Black Tarantella, e’ ancora tiempe, there’ still time, yes, Pino, to follow in your footsteps.